Much like the characters in my romantic suspense novels, Reba isn’t perfect.

She’s five years old, a small, white mutt, and I swear her legs are made of springs. This little girl can jump!

I met her four and a half years ago after she was abandoned by her previous owners. Imagine someone putting their six-month old puppy in the car, driving to an unfamiliar location in the early hours of the morning, and tying her to a tree. They left that little puppy alone, scared, and confused. Thrown away like so much trash.

I,ve been blessed tenfold since Reba came to live with me.

As I mentioned earlier, she’s a jumper! I made the mistake of teaching her to jump up into my arms. Now, when I least expect it, she launches herself off the ground and bounces off my chest. I signed her up for agility classes, hoping to channel her enthusiasm. I had a blast, but it turned out, I enjoyed it way more than she did. 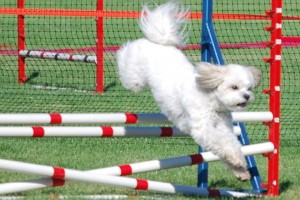 Reba is a little timid, and loud noises like gunshots, thunder, or large crowds of people tend to cause a meltdown. This picture is from her first…and last agility trial. She executed a beautiful jump over the first obstacle. Good thing the picture was snapped then because, right after that, she headed for the hills, and I spent the next ten minutes trying to catch her!

That’s okay—we’re not all cut out for dog shows. Reba has other talents. For example, she’s the absolute best at cuddling. That works for us because I need a hug way more often than I need her to race through a tunnel.

Every dog is different and not one of them is perfect. Reba is exactly the dog I need, and I love her, imperfections and all. Isn’t that how it should be?

by Dixie Lee Brown Posted on January 20, 2013
This entry was posted in Short Stories. Bookmark the permalink.