White-knuckled, heart-pounding, mind-numbing fear had a choke hold on her throat. Tori hated helicopters. She definitely hadn’t thought this through when she followed Blake and jumped in with him as he was about to take off. Her brain had misfired at the prospect of losing her job and the trickle-down effect that would have on her life…and the life of her six-year-old son.

For the Love of a SEAL, book 3 in the Hearts of Valor series, releases in just under 2 months! Read on for the continuation of this exclusive excerpt. 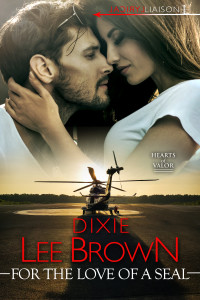 Having been a stay-at-home mom since Isaiah was born, proud owner of a journalism degree but no work experience, it’d been unimaginably difficult to land a job. Within weeks of discovering the untenable financial position she’d been left in when her husband died, the bank had foreclosed on her house. Options were a thing of the past. She’d needed a job, even a temporary one. It didn’t matter that her new boss had a preset interview list or that he would accept nothing less, because there was a chance, however small, she’d be hired on in a permanent position if she performed in a manner that exceeded her boss’s expectations.

If she didn’t find a way to change Blake Sorenson’s mind, she could kiss that possibility goodbye. Even her temporary position would be in danger, with small likelihood she’d land other employment before she was evicted from her rental house, putting her and Isaiah out on the street. She couldn’t let that happen.

The helicopter leveled off, and Tori’s stomach finally caught up to the rest of her. She swallowed hard, willing her breakfast to stay down as she focused on the horizon. They were headed east, into the morning sun, and if the miles of dense timber below were any indication, they were somewhere over the Siskiyou National Forest.

Suddenly, the gravity of her situation hit her full force. She had no idea where they were going…or how long they’d be there. The man she was with was a total stranger, and first impressions hadn’t exactly won her a place in his heart. What if he’d allowed her to stay onboard only to teach her a lesson? Would he drop her at his first stop, abandoning her to find another way home? Perhaps it was what she deserved, and she wouldn’t really blame him, but the realization she was at his mercy put a damper on her determination.

Uncertainty ratcheting her tension, she glanced toward him, only to find him facing her, his jaw set in a hard line. The sunglasses he wore hid whatever he was thinking, except for the serious frown creasing his forehead. Tori caught her bottom lip between her teeth as she swung toward the front again.

Blake’s warm chuckle came through her headset. “Are you all right? You’re looking a little green. You’re not going to puke on me, are you?”

“Of what? Flying?” This time he issued a full belly laugh. “You could have fooled me.” He leaned toward her until she looked at him. “You do remember coming along on this flight was your idea, right?”

“Yeah, that decision might have been just a tiny bit too spontaneous.” Tori couldn’t help laughing. When she looked toward him again, a grin teased his lips. “I’m sorry. I don’t know what I was thinking.” Seemed she couldn’t stop apologizing either. In fact, since the second she’d laid eyes on the exceptionally attractive Blake Sorenson, her brain had failed to engage before opening her mouth. Resisting the urge to slap her palm to her face, she shrugged. “You could have kicked me out. Why didn’t you?”

“Could have, I guess. Too late now, though. This is a round trip—in case you were wondering.”

Though she couldn’t see his eyes behind his dark glasses, something about his rugged features kept her from looking away. His words, and the sincerity with which he’d uttered them, eased her uncertainty, but she was still curious. “You didn’t answer my question. Why’d you let me tag along?”

It sounded like he might have sworn as he returned his attention to the controls. “I make it a rule to get to know every woman I come across wearing red stilettos.”

A laugh burst from her lips, and she studied him doubtfully. “Really?”

“Standard operating procedure.” Blake pushed the control stick to the right, causing the craft to roll slightly, and Tori grabbed the cushion of her seat to keep from sliding toward the door. “Relax. I’ve been flying a long time. You’re in good hands.”

It wasn’t his hands she was worried about. Besides, those hands looked incredibly strong. And capable. The idea of being in his hands wasn’t completely distasteful. His arms and legs were muscled and powerful, and his chest filled out his T-shirt nicely. Not that the observation made her feel any better, but he was undeniably easy on the eyes. And, okay, maybe the confidence and authority that enveloped him like a second skin did make it a tiny bit easier to breathe.

“So…red stilettoes, that’s what does it for you?” Tori tilted her head and crossed her ankles, immediately drawing his focus to her legs.

Blake gave a mirthless laugh. “Don’t even try to play that game. You women know exactly what you do to men when you wear four-inch heels. If they’re red, even better. You want us to notice and then you act all innocent when we do and follow it up with a come-on. Right? Admit it.”

“You might be partially right.” Tori flicked her bangs out of her eyes with a swipe of her hand.

“Do tell—which part?” Blake’s nostrils flared as his eyes remained hidden behind his shades.

“It’s not only women. Most people dress to be noticed. Take you, for example.”

Tori let his skeptical objection go unanswered. “The aviator sunglasses. The tight, Navy SEAL T-shirt stretched just right over those manly pecs, the sleeves barely able to wrap around your massive biceps. Formfitting jeans that hug you in all the right places and highlight your…assets. Are you going to tell me you don’t want anyone of the opposite sex to look twice?” Tori stopped, her observations challenged by Blake’s steady perusal.

He jerked the sunglasses off and hooked them on the neck of his shirt, squinting from the sun streaming through the windows. “I wear the glasses because I’ve been too close to too many IED blasts and, as a result, bright light gives me headaches.” His grim demeanor seemed to melt away as he locked his chocolate-brown gaze with hers and winked. “But you got me on the rest. Heck yeah, it’s hot as hell when a woman appreciates a man. Even hotter when she lets him know. So…my assets…that’s what does it for you?”

If you enjoyed the teaser, please let me know by clicking the “Like” button

at the bottom of the page.

by Dixie Lee Brown Posted on February 10, 2019
This entry was posted in Books and tagged Dixie Lee Brown, Exclusive Excerpt, For the Love of a SEAL, Hearts of Valor, Lyrical Liaison, Navy SEAL, Romantic Suspense. Bookmark the permalink.