I’ve learned over the last year that naming a character is of the utmost importance and deserving of far more attention than I’d given to the responsibility up until then. My first lesson came when I decided to write a sequel to ALL OR NOTHING using a secondary figure as the main character.

Walker was a great supporting character in the first book, but with a name like Jeffries, no one was going to take him seriously as a hero. I mean—really—sounds more like a butler than a cynical and jaded ex-Marine who would do anything to protect the woman he loves.

No problem. I was still looking for an agent. No one was even close to being interested in my book…so I changed his name and went on my merry way.

Next, I needed a name for my heroine and the love of Walker’s life. I wanted a name that, for lack of a better description, was slightly old-fashioned. You know…a name that a baby-boomer like me might have given their child. I picked Rachel, and it was perfect. Except, I still hadn’t learned my lesson.

About that time, the wonderful Dawn Dowdle offered to represent ALL OR NOTHING. She put me on the list for editing, and I continued to write my next book. I was finished with the second book and had a pretty good start on a third—unrelated to the first two—when Avon Impulse indicated they were interested in three books, all related to the little band of mercenaries I’d created.

Great! I knew immediately who the hero and heroine of book three would be. Both had appeared as secondary characters in ALL OR NOTHING. It wasn’t until I wrote “Rachel and Rayna” together in the same sentence that I realized I had a problem. It was too late to change the first book. Rayna was a permanent part of the cast.

It broke my heart to rename Rachel’s character, and it wasn’t easy coming up with something that had the same feel…from that same era. Eventually, after an exhaustive look through my character list, I settled on Darcy. Lesson learned…I think!

Now, for those of you who’ve read this far, here’s a sneak peak at the cover of WHEN I FIND YOU, book two in the Trust No One series—and Walker and Darcy’s story. The e-book is available for pre-order now, for delivery July 16th. Amazon doesn’t have the cover or any descriptive copy up yet, which is why I haven’t shared on Facebook. So, you all get it here first! Let me know what you think. 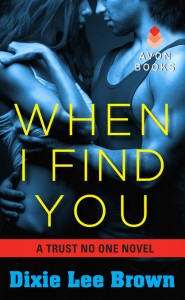